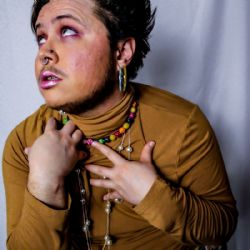 No one can tell you how to be a man. And yet, when you're transmasculine, it seems everyone tries to. From medical systems set up to gatekeep who is allowed access to gender affirming care, to toxic social norms demanding hyper-masculine standards of appearance and behavior in order to "prove" your commitment to your transition, there's no escaping the rigid set of gender expectations other people will try to assign to you as soon as you start using he/him pronouns in public.

Learning how to navigate the world as a man is an exercise in culture shock and yet, at the heart of it, the misogyny applied to you before and after remains relatively unchanged. The process of "becoming a man" is about so much more than taking testosterone, growing a beard, or having surgery to masculinize your chest. It's about wearing the right cuts of clothing, eschewing color and joy from your wardrobe, throwing away your jewelry and makeup, styling your hair exactly the right way, giving up all your previous hobbies, enunciating your words differently and changing your entire vocabulary. Trans men are, in many ways, held to much stricter gender standards than cisgender men ever will be. And when other people refuse to respect your identity, discriminate against you, assault you, or worse, someone out there will always pick apart your efforts to prove you haven't tried hard enough.

The most challenging thing about transition isn't the sidelong glances from strangers. It's not the pain of surgery or the financial burden of medical and mental health care. It's not even the hurtful words or rejection from loved ones who refuse to support you. It's deciding what kind of man you want to be with few positive male role models. It's learning what it means to construct a masculine identity when no one ever taught you how. It's having the courage to decide how you want to show up in the world, and doing it despite the social ramifications.

Sometimes, the bravest thing a trans man can do is have the guts to wear pink in public.

Ori Jay (he/they) is a Latinx transmasculine writer, artist, and activist. His writing has been published in Salon, Prism Reports, Lightspeed Magazine, Fantastic Stories of the Imagination, Inhabitat, and other publications. Their visual art has appeared in group exhibitions in Chicago, Denver, and Portland. He is currently working on a nonfiction manuscript, "The Life and Times of Trans People" for Microcosm Publishing. He recently received his BFA in Art Practice from Portland State University.